en /
THE PERCEPTION OF MATTER /

THE PERCEPTION OF MATTER

In the exhibition we perceive the material encounter of original wooden architectural elements from two different parts of the world: Aysén, Chile, and Brandenburg, Germany. The Fachwerk construction model, transferred to southern Chile by the German colonisers which began to arrive in 1850 (1), and its consequent adaptations and transformations in the architecture of Patagonia’s „difficult geography and harsh climate“(2) had never been so close. The artists Olaf Holzapfel (Germany) and Sebastián Preece (Chile) continue their artistic collaboration and archaeological mode of working(3) through the dismantling, transportation, and reassembling of architectural fragments for their new installation Housing in Amplitude, in Berlin. Inside the exhibition space, the remote construction systems coexist and intertwine, inviting the audience to experience a new trajectory through the traces left in the materials and the dynamic processes typical of the hybrid cultures of immigration. Fragments of the sturdy, long-lasting Fachwerk(4) from Brandenburg, built around 1850 to store food supplies, exhibit its characteristic structure based on wooden frameworks filled with mud. Meanwhile, a series of over 800 roof tiles, carved out of legna(5) with an axe in the 1950s by the colonisers from Aysen to build the Cerro Castillo School, show evidence of the adoption of German roof building techniques. Differences remain visible due to the use of local wood and the wear and fragility of the material, resulting from strong winds, torrential rain, scorching sun, and more provisional modes of construction.

Two videos included in the installation insert us in spatial histories that deal with modes of construction and life in Aysén. Shepherds, muleteers, and timber merchants‘ nomadic way of life radicalised the adaptations, giving priority to shelters as a type of construction that was quick to build and thus a good survival tactic against the elements. These provisional constructions also maintain indigenous lifestyles that are connected to the time of the year and to the territory’s amplitude, beyond the contemporary logic of private property. One of the videos immerses us in the verses and surroundings of the popular poet Delino de la Hoz, from El Blanco, Aysén. Through his song, we accompany the timber merchants in their travels, seeing the precariousness of southern life, where materials are subject to continuous wear and repair. „Cansado de parchar“ [Sick of Mending] is the poet’s elegy, where he speaks of using plastic and metal to repair the original wooden structure of his home. Around him, burnt forests stand in memory of the many cases of arson committed up until 1950 to „clean“ and „open up“ the fields.Through a second video, we witness the activity taking place at a sawmill in Patagonia. The sawmill carries the material history of modern housing, and shows us, cut by cut, how a log is transformed into a plank, and how irregular bark is turned into an abstract, smooth surface. Wood, the main material in the show’s architectural elements, contains material traces that allow us to read about the working processes it has been through: in the coarse wood we see the dent and edge of the axe, whilst in the smooth wood we recognise the clean industrial cut of a sawmill, which, in Aysén’s case, began to function in the 1930s. Some sawmills, such as the one pictured in the video, came from Germany, and were the technology of immigration brought by the first colonisers.With the arrival of the sawmills in Aysén, manual labour was gradually replaced by industrial and mechanical labour, allowing for the rapid production of the wooden planks needed for the construction of temporary buildings that used the structure of the Fachwerk, but which used nails to create joints rather than the carefully planned geometrical joints of the original Fachwerk. For the site-specific installation Housing in Amplitude (2013) in Cerro Castillo, Aysén, which gives the installation in Berlin its title, and which works as a reference, Holzapfel and Preece applied these quick construction techniques as a transfer of knowledge from local carpenters, thus reconstructing the Patagonian Fachwerk and raising the wooden framework as a cultural code in the amplitude of the southern landscape(6). Far from being a nostalgic operation, Holzapfel and Preece’s work presents the contemporary aspects of the Patagonian territory together with Fachwerk’s traditional methods. But over and above the discourse that situates Aysén as a place of „pristine and immutable nature“, the perception of the materials on show present the transformation of the territory and its contingency as a cultural landscape or „humanised landscape“(7). Through the traces left by axes, the sawmills, and fire, we read about the modern occupation of the territory and the politics of colonisation, an „architecture of the anthropocene“ which questions the distinction between nature and culture(8). Through this archaeological way of working, the artists follow indigenous traces towards the identification of provisional housing, bringing up to date the local critical tradition of making the displacement of the indigenous population resulting from colonisation visible. How many times, up until the 20th Century, has Aysén been described as a „solitary“ and „uninhabited“ territory, ignoring the indigenous communities that inhabited it for 10,000 years?

If Bernd and Hilla Becher brought to the public eye the architecture of the German Fachwerk through photography, Holzapfel and Preece radicalised the operation by intervening in reality. By dismantling, transporting, and reassembling historical architectural elements of the Fachwerk; entering into the community of knowledge of local carpenters; creating a transatlantic compilation that sheds light upon the dynamics of immigration. More than merely capturing a façade, Housing in Amplitude unveils construction processes, capturing the movement, struggle, and context of materials, presenting evidence of how networks of relations and differences are linked to local forms of living. In the face of Google Earth’s virtual reality, social networks, and the homogeneity of global thinking, Housing in Amplitude exhibits the qualities of matter, its local affects, actions, knowledge, memories, and roots. Paz GuevaraTranslation: Alexandra Reynolds Cortijo

(1) In 1845 the Chilean government passed the Colonisation Law, which promoted the arrival of the German colonisers to the south of Chile. In 1850, the first large group arrived, led by Karl Andwanter, ex deputy of the Prussian parliament. Disillusioned by the failed revolution of 1848-49, they decided to leave Germany to pursue their republican ideals in the young Chilean Republic. Between 1850 and 1875, approximately 6,000 Germans settled in Valdivia and Osorno. Due to uneasy access, imprecise representation on maps, and lack of public infrastructure until the 1930s, it was only towards the end of the 19th Century that immigration (European and Chilean) reached the most southern regions of Chile, such as Aysén in Patagonia. Aysén’s architecture therefore initially developed through a grammar held in common with its territory, local materials, freedom, and solitude, rather than through laws and a predefined definition of space. This radically transformed its construction typologies.(2) Martinic, Mateo. De la Trapananda al Aysen : una mirada reflexiva sobre el acontecer de la Región de Aysén desde la prehistoria hasta nuestros dias. Santiago, Pehuén Editores, 2005, p. 206.(3) During two years of artistic collaboration, the artists developed residencies and site-specific installations such as IslaAysén (2013) and Proyecto Trapananda (2013) in Aysén, and the recent exhibition and catalogue, both titled Housing in Amplitude (2014) at the Museum of Contemporary Art of Santiago, Chile. (4) More specifically, the niedersächsisches Fachwerkbau. See: Binding, G., Mainzer, U., y Wiedenau, A. Kleine Kunstgeschichte des deutschen Fachwerkbaus. Darmstadt, Wissenschaftliche Buchgesellschaft, 1975.(5) A type of wood from Patagonia.(6) For a broader reflection about the works created in Aysén and the exhibition Housing in Amplitude at MAC, Santiago, see: Paz Guevara, „El Territorio como Archivo Vivo“, in Housing in Amplitude. Ed. Puro Chile, Santiago, 2014.(7) Martinic, Op. Cit. p. 457.(8) Turpin, Etienne. Architecture in the Anthropocene. Encounters among Design, Deep Time, Science and Philosophy. London, Open Humanity Press, 2013. 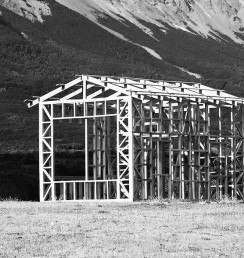 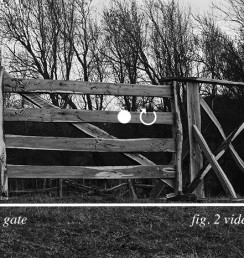 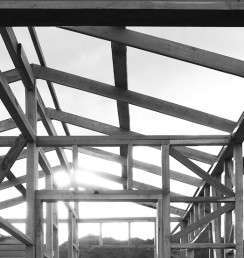 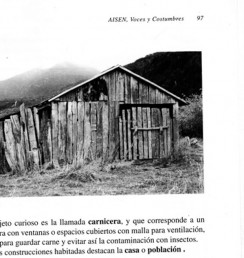 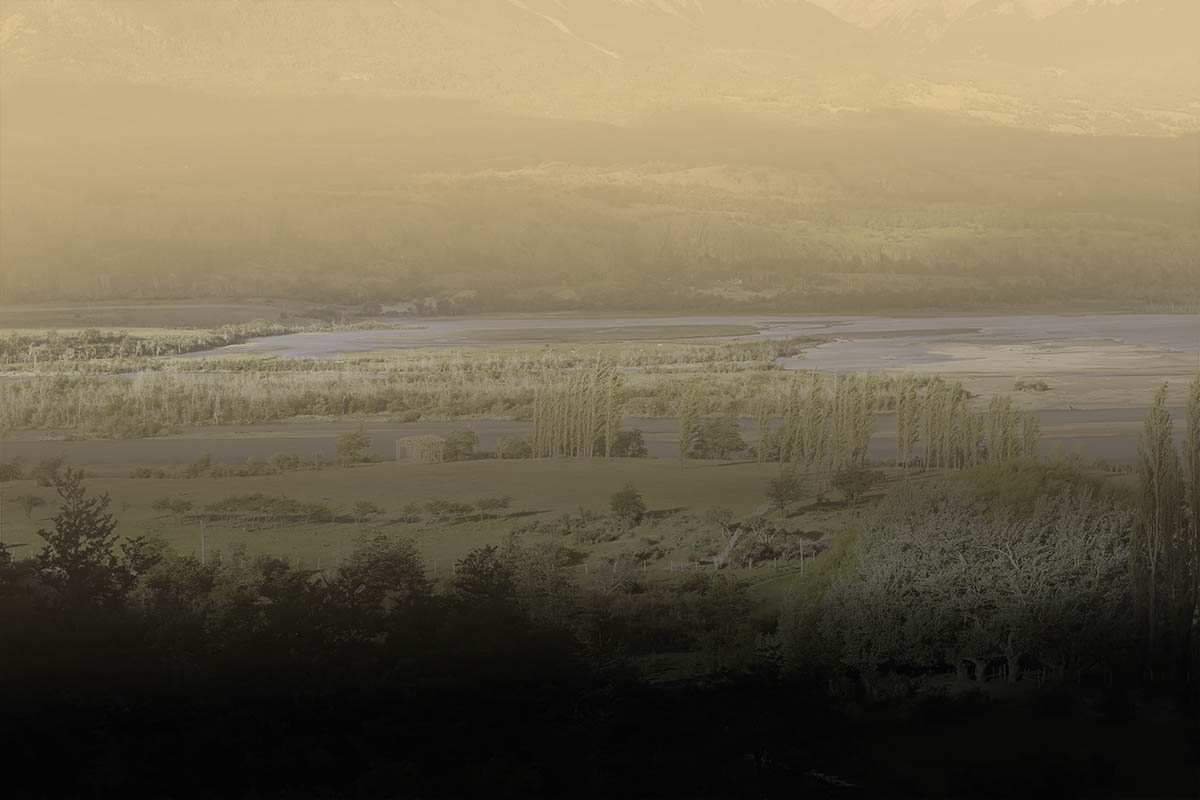